In a State of Love, We are Fearless – Random Acts of Kindness Day 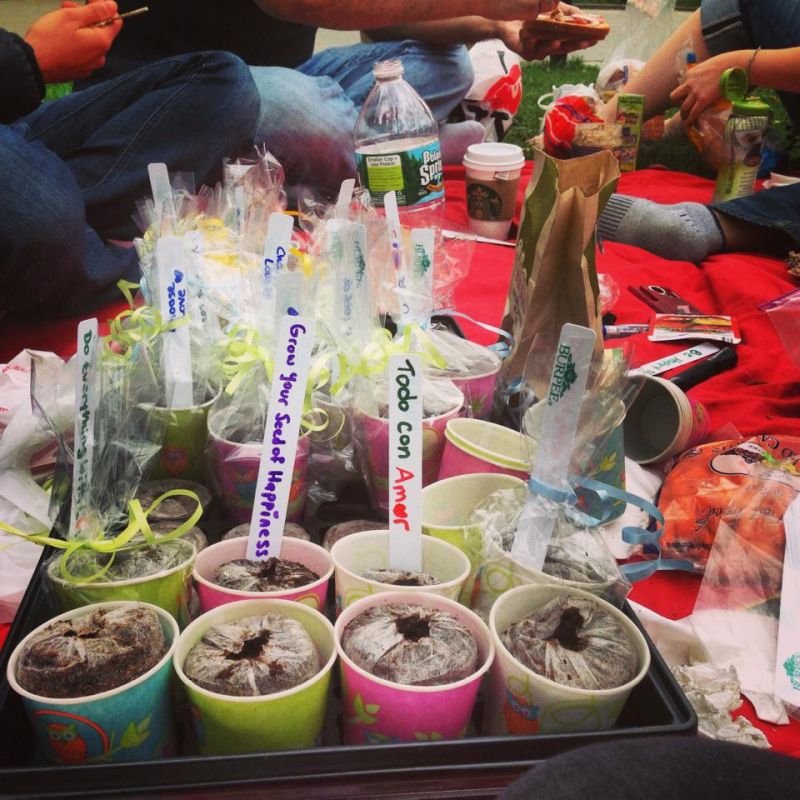 We met at noon under the arch in Washington Square Park. There was already a kind of magic around us. Children danced in front of the woman blowing giant bubbles. A quartet of older men sang 50’s tunes. There was music everywhere.We set up a large red blanket on a grassy area near the man playing a grand piano. Our discussion of intention and 15-minute meditation were supported by Beethoven, Mozart, and Debussy. Anne-Marie shared an article from Positive Psychology News Daily, highlighting a line about being kinder than necessary. We thought about the idea of being kinder than necessary, and Anne-Marie encouraged us to take that idea with us, during the day and in our everyday lives.

We started with our Seeds of Kindness activity, planting basil and zinnia seeds in soil in paper cups. On plant labels, we wrote messages that we hoped others would take home with them, like “Grow Your Seed of Happiness,” “You are Enough,” and “Todo Con Amor.” When the cups were almost done, we made almond butter/apricot marmalade/strawberry jam sandwiches (some gluten free!), and got ready to get to the real purpose of the day: making connections.
When Sunaina and Sarika began passing out the “seeds of kindness,” they struggled to find people willing to accept the gifts. They approached a group of guitarists sitting on a bench. The guitarists asked Sunaina and Sarika what they were doing, so Sarika explained the random act of kindness idea. The musicians sang a song for Sarika and Sunaina, and began playing “Let It Be.” Sunaina sang, accompanied by a group of tourists who clapped along with the beat. Something about the interaction lent itself to the seeds of kindness activity—by the end of the day, each seed had been gifted. 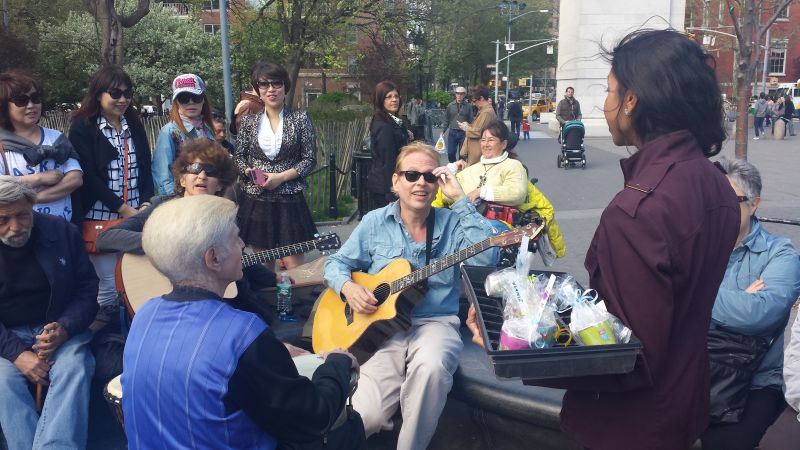 While Sarika and Sunaina sang, others passed out sandwiches, making connections along the way. Bharat met Terron, a man without a home, who later wrote a word in chalk on the sidewalk: “Goodness.” Chris met Charlie, a guitarist, who sang a song about meeting Jimmy Hendrix.

The sidewalk chalk activity began with a couple of positive quotes written on one pathway in the park. Anne-Marie and Yazmeen offered chalk to passerby, who wrote messages of hope and love (in several languages) on what grew to be a 50-yard stretch of pathway. One man, unsure of what to write, took a moment and wrote, “It’s Always Worth It.” One young woman, claiming to not feel very positive, decided to write something at the edge of the sidewalk. She drew a few arrows and wrote, “Let’s Move Forward.” 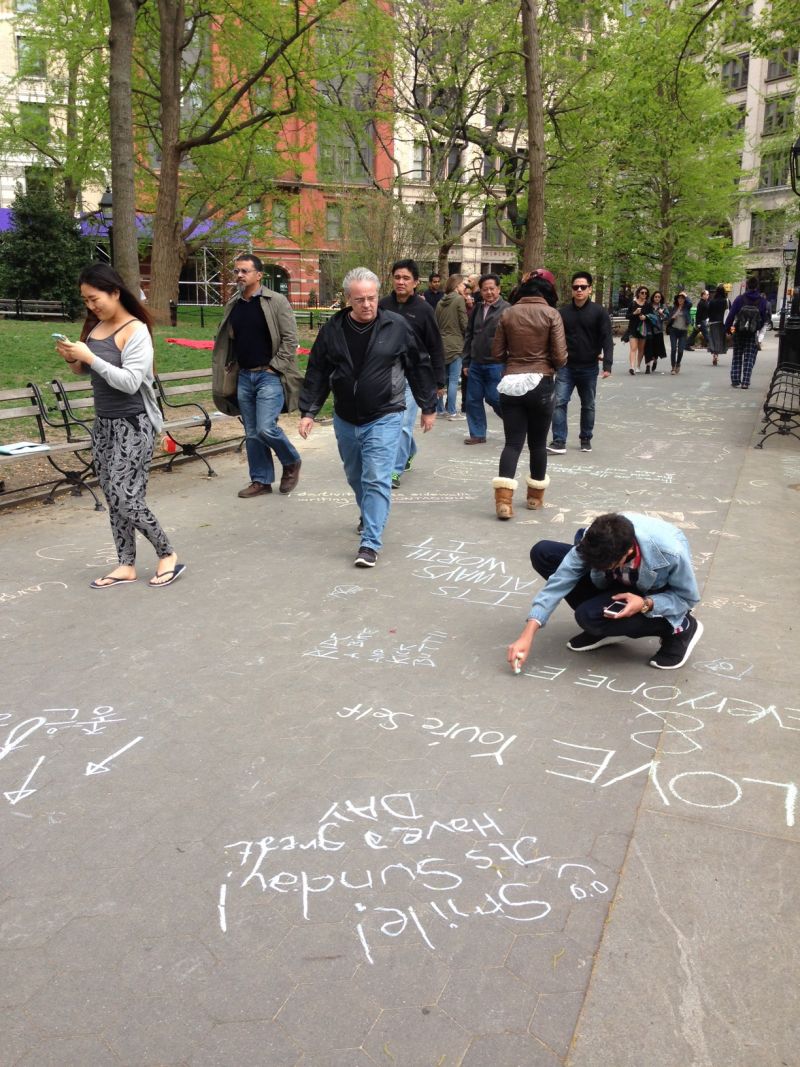 Ryan, one of the passerby who was offered a piece of chalk, asked about the group. We explained our purpose for theday, and he asked, “Is this part of Awakin? I get your emails!” He joined us for the rest of day, including our final sit.

During our reflection after a few hours of making connections, Sarika shared that when she is in a state of love, she is “fearless.” Many of us nodded our heads, still beaming smiles from the afternoon.

Bharat shared that—especially compared with his experiences volunteering in soup kitchens—during this service event he was able to engage and connect with others, which brought him joy. Ankit noticed, even during our final sit, that people who would be in their usual New York City rush started to slow down to take notice of all the kindness chalked on the pathway. 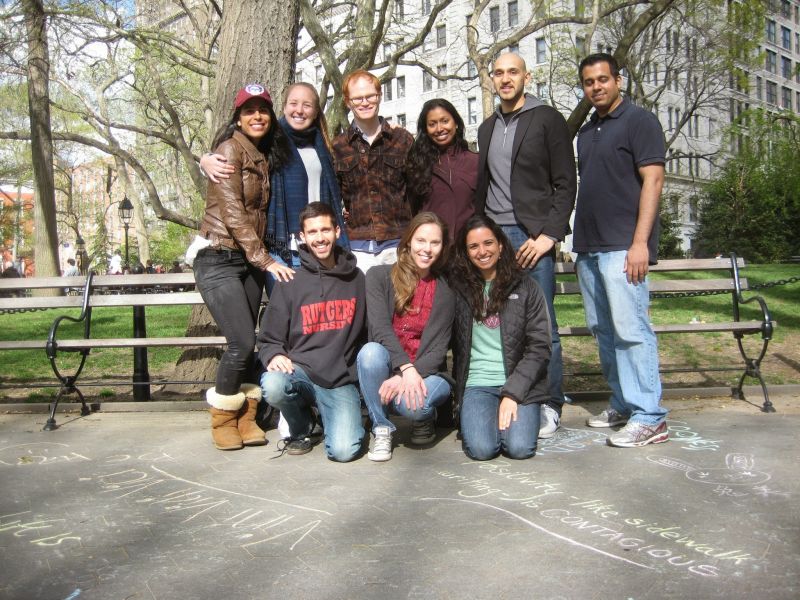 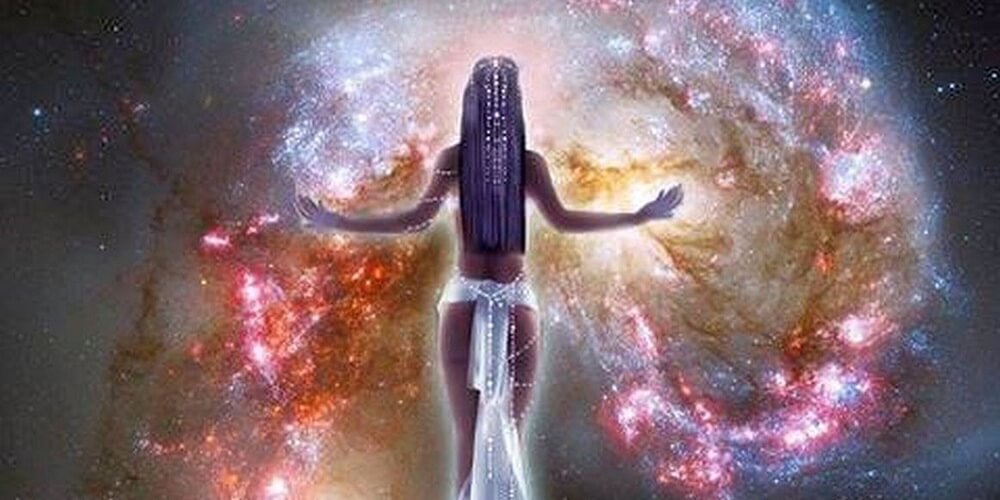